The Christmas season is an exceptional one in Madeira. Popularly referred to as "a Festa" (Portuguese for “the Feast”), this time of year features several customs and traditions that go back several centuries and have their roots in the ways of Catholicism.

Intensely lived by the locals, it is also one of the seasons that brings more visitors to Madeira, attracted by the festive charm and the fireworks display at the end of the year.

Weather in Madeira at Christmas

Madeira island has mild weather with a low annual thermal range. There are various micro-climates, which vary according to altitude, solar exposure, and maritime currents. Madeira's winters will feel very warm if you come from a country with a cold climate.

December and January are usually when it begins to get colder. Average daily temperatures drop to 17-19 in south-facing cities like Funchal and Ponta do Sol. Temperatures drop further on the island’s north side and in higher altitudes.

Expect some rain during the Christmas season. Snowfall occasionally happens at high altitudes (above 1.500m).

It is common to find a nativity scene and a Christmas tree in any Madeiran house during Christmas. In the olden days, the Christmas tree was a natural pine tree from the Madeiran hills, bought from one of the many sellers who populated the streets of the cities. Nowadays, artificial pine trees are the norm, adorned with small decorative balls, “gambiarras” (strings of miniature lights), and a star on top. Madeirans usually exchange Christmas presents on the 25th.

Next to the Christmas tree is, almost always, the nativity scene. There are two common ways of depicting the nativity scene in Madeira. It can be made from wooden or cardboard structures lined with painted paper - replicating the island's orography – and populated with ceramic figures (representative of biblical characters and traditional Madeiran professions, such as shepherds, milkmen, and merchants); or take the form of a small altar covered with Madeira embroidery towels, with several steps, decorated with oranges, chestnuts, walnuts, and with a figure of the Baby Jesus at the top. This latter is called "Lapinha".

The nativity scenes in Madeira are not only used as interior decoration: they are a reason for pride and a reason to visit the different cities and towns of the island, which display in their squares and churches true works of art that portray the landscapes and customs of the Madeiran people.

In December, there are also the "Missas do Parto". These are masses celebrated at dawn typically 6 am) between the 16th and the 24th in devotion to the Virgin Mary. After church, the locals eat and drink at the “barraquinhas” (small wooden stalls serving food and drinks). Often, these gatherings are accompanied by folkloric songs and dances.

At midnight on the 24th, the “Missa do Galo” (Mass of the Rooster) takes place, so-called because of the belief that a rooster announced the birth of Jesus Christ. 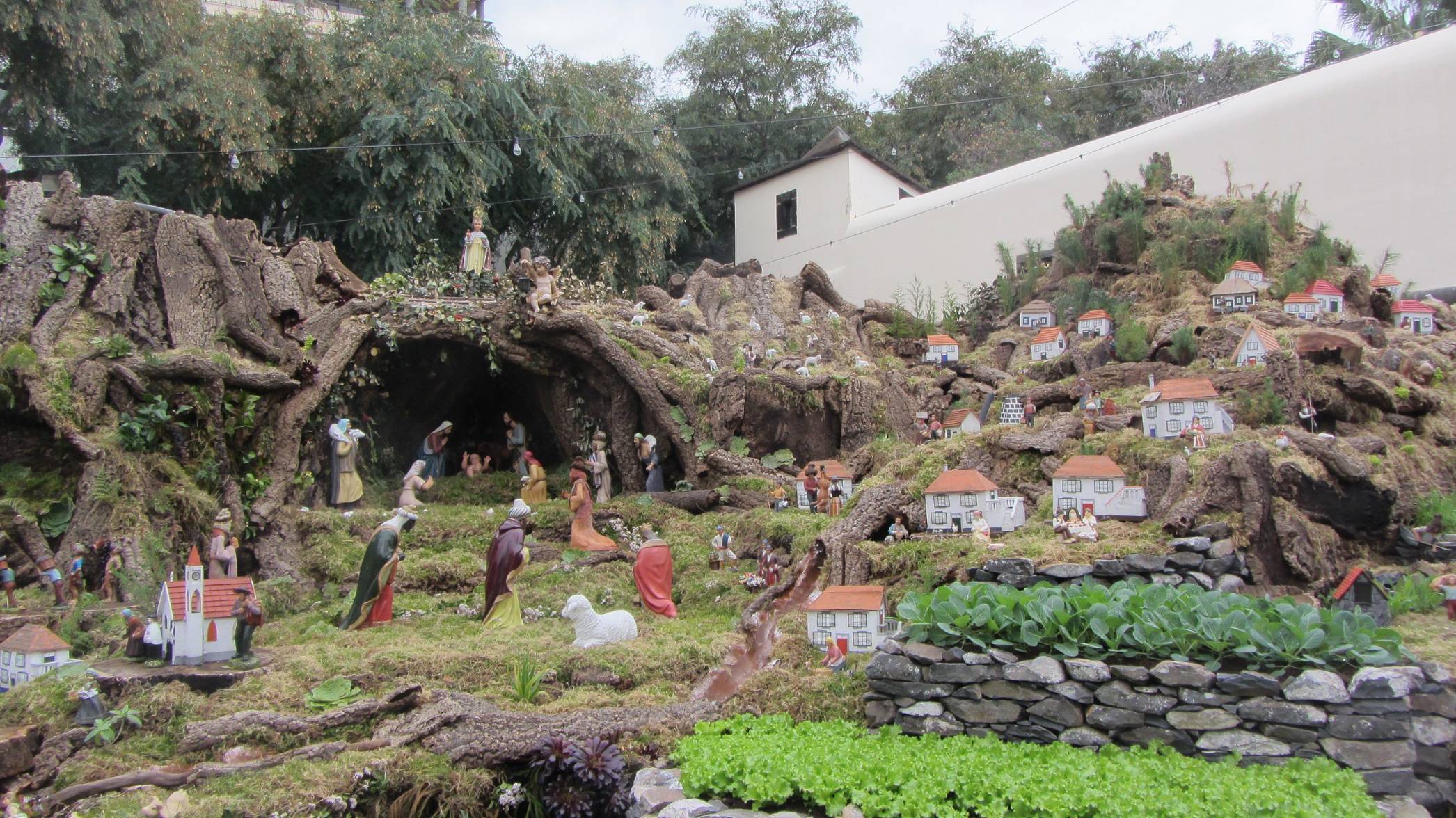 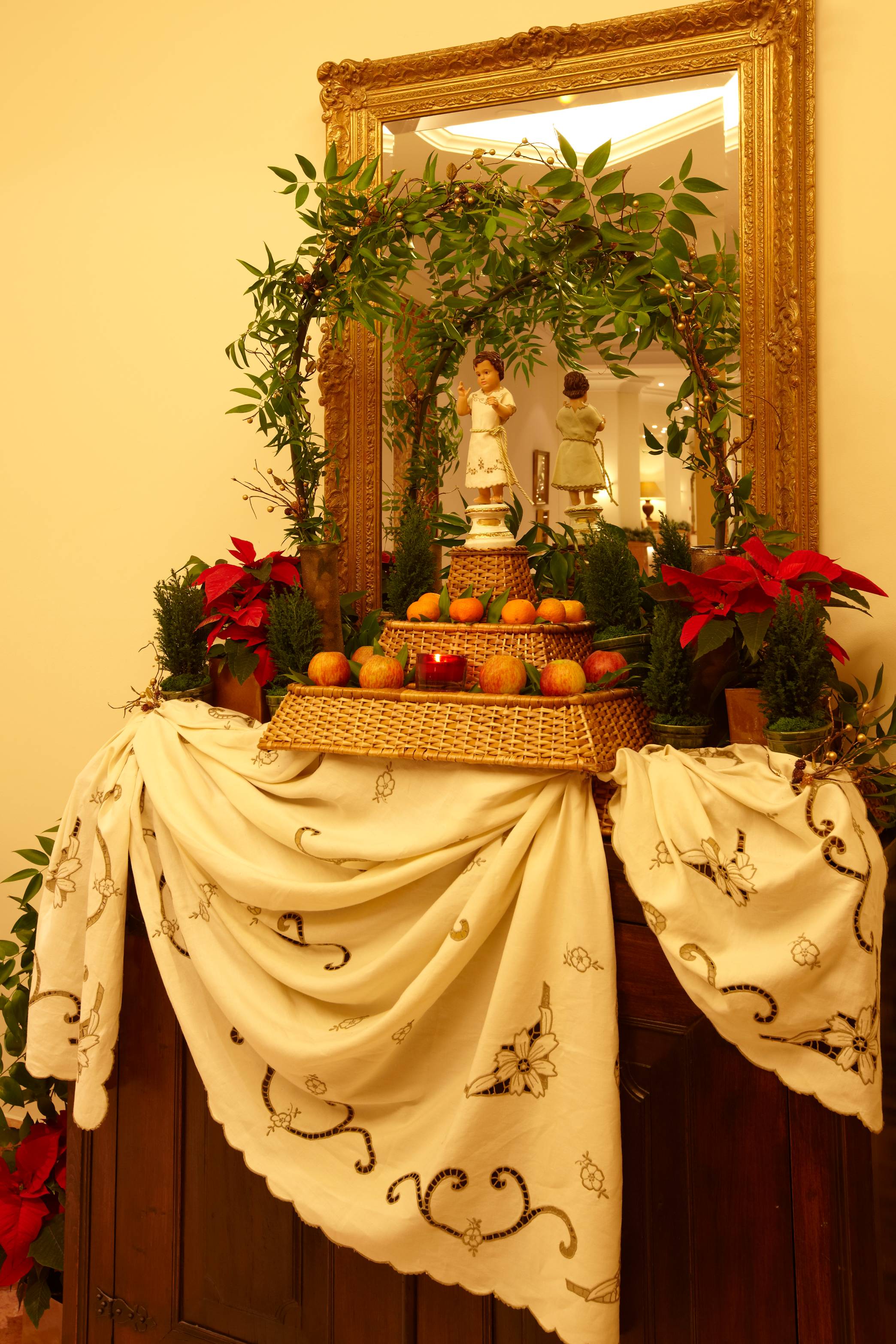 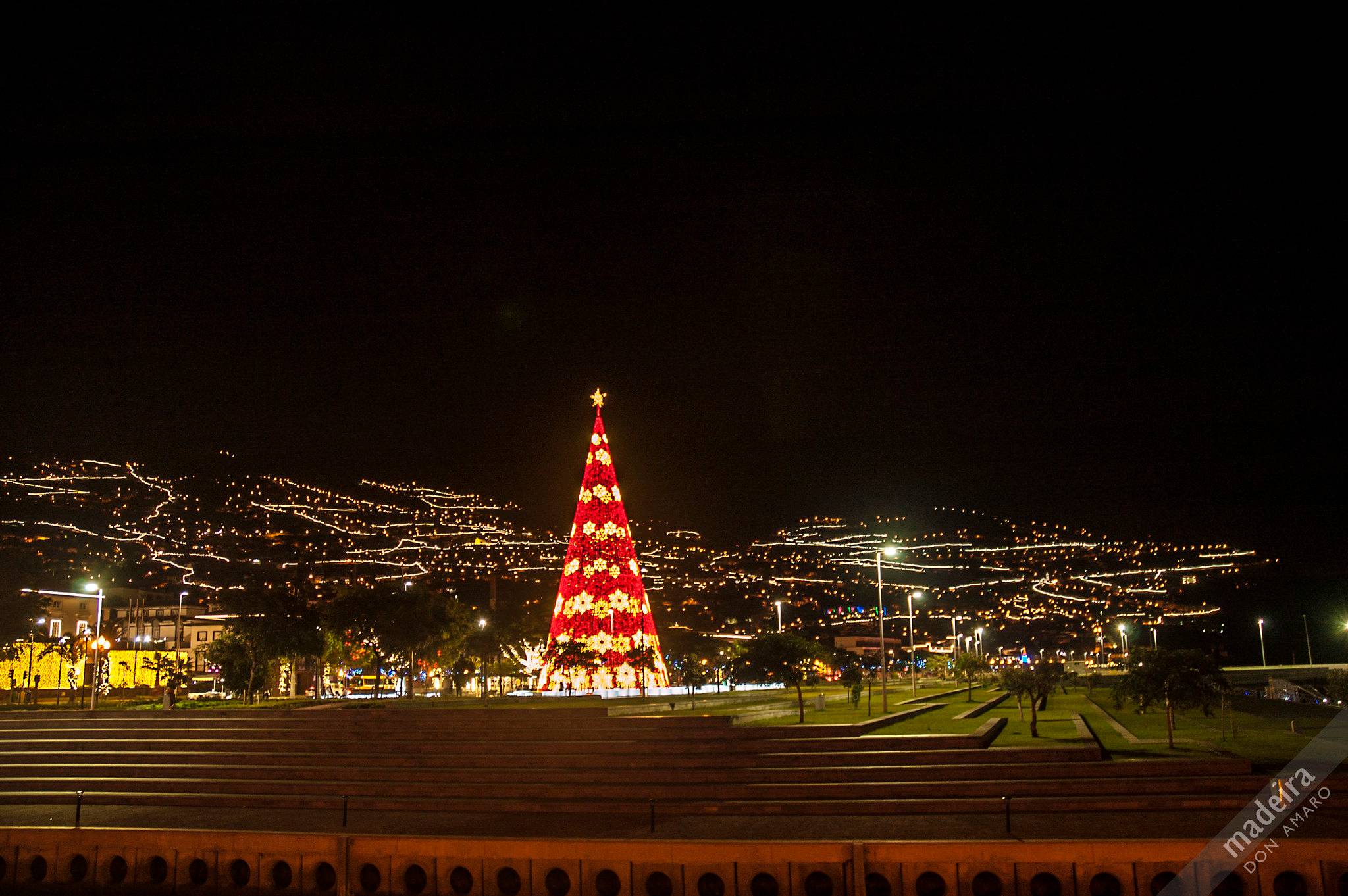 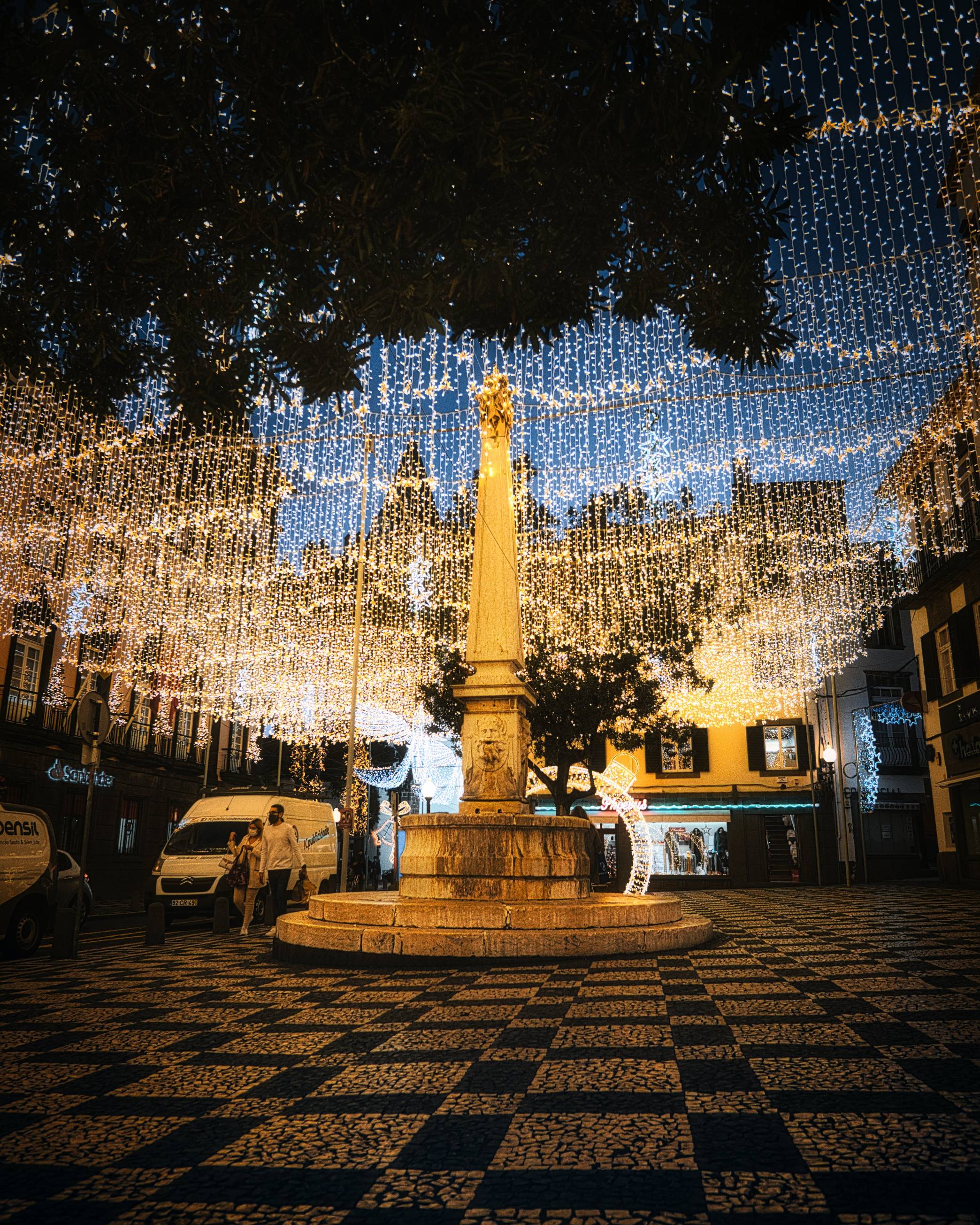 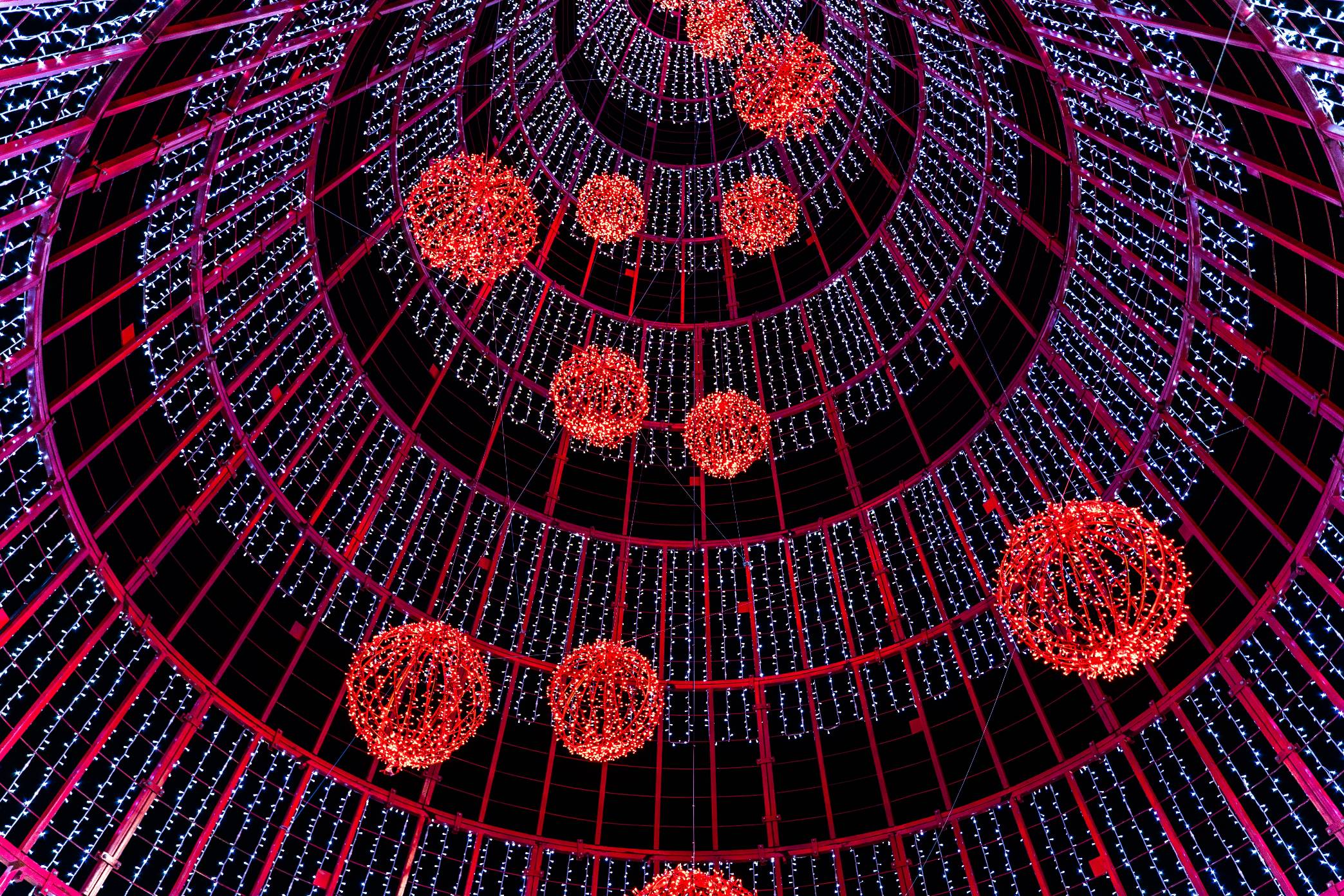 Funchal is a true winter wonderland during the Christmas season.

The Christmas lights are one of Funchal’s biggest calling cards during the holiday season. The main streets of the Madeiran capital are dressed in light and colour. Along with the street lighting and other decorations, a gigantic Christmas tree is set up in Avenida do Mar. Walking downtown Funchal to see the Christmas lights and decorations is an annual tradition for many locals and tourists.

The ethnographic village is another big attraction in Funchal. Located in Largo da Restauração, close to Funchal’s Municipal Gardens, it features a huge nativity scene built to resemble Madeira’s landscape and stalls that sell chicken soup, liqueurs, and traditional Madeiran products such as embroidery, wicker baskets, clothes, boots, and others.

Nearby you’ll find the Christmas Market along the central walkway of Avenida Arriaga, with food and beverage stalls where families and friends meet for a poncha (or two) and to watch the daily performances that include philharmonic bands, folklore groups and concerts. You can check the complete programme of the performances here.

The “Noite do Mercado” (Market Night) takes place in the Funchal’s Farmer’s Market on the 23rd of December. This tradition dates to the 19th century when locals used this night to buy fruits, vegetables, and other groceries. Nowadays, locals gather around the Farmer’s Market not only to purchase fruits and vegetables but also to eat, drink, and enjoy the various attractions and entertainment around downtown Funchal. The surrounding bars take advantage of the occasion to stay open all night, making this one of Madeira’s longest and liveliest nights.

Madeiran gastronomy is famous for its many delicacies. A big part of Christmas in Madeira is the family gatherings on Christmas Eve, Christmas Day and the 26th. The Portuguese don’t celebrate the 26th as Boxing Day but as a “continuation” of Christmas called “Primeira Oitava”.

Typical Christmas dishes in Madeira are:

The New Year in Madeira

In Madeira, the Christmas season continues throughout the New Year. The New Year’s Eve firework show in Funchal is the incredible spectacle of the last day of the year, but there are other attractions. Funchal’s streets live on with performances by singers, dancers, and other folklore. The “barraquinhas” continue selling food and beverages, and the locals and tourists still wander the city’s streets.

The Tour of Funchal (also called Saint Silvester Race) is a road race around Funchal that usually takes place on the 28th. It is one of the oldest Saint Silvester races in Europe, and many runners sign up.

The New Year hallmark is so important that one evening is not enough for the locals to celebrate it. The festivities start on the 30th of December, with many hotels and restaurants in Funchal hosting glamorous dinner parties that are fully booked, in some cases, many months in advance.

The Guinness Book of World Records recognises New Year’s Eve in Madeira as the biggest pyrotechnical spectacle in the world. Every year thousands of Madeirans and tourists from the four corners of the world gather at Funchal's seaside and at the viewpoints surrounding the city to watch this explosion of light and colour. Several cruise ships dock at the port of the Madeiran capital, providing a fantastic view of the fireworks on the city’s slopes.